We, the undersigned peace, justice and environmental organizations and individuals from around the world, endorse the following Statement of Unity and commit ourselves to working together in a broad-based international campaign to organize an International Conference Against all US/NATO Military Bases, with the goal of raising public awareness and organizing non-violent mass resistance throughout the world against all US, NATO and EU military bases, and their military missions around the world.

While we may have our differences on other issues, we all agree that US/NATO military bases are the principal instruments of imperial global domination and primary causes of devastating environmental and health impacts through wars of aggression and occupation, and that the closure of the US/NATO military bases is one of the first necessary steps toward a just, peaceful and sustainable world. Our belief in the urgency of this necessary step is based on the following facts:

The NATO states’ military bases in other countries are NOT in defence of their national, or global security. They are the military expression of imperialist intrusion in the lives of sovereign countries on behalf of their dominant financial, political, and military interests of the ruling elite. Whether invited in or not by domestic interests that have agreed to be junior partners, no country, no peoples, no government, can claim to be able to make decisions totally in the interest of their people, with foreign troops on their soil representing interests antagonistic to those of their peoples.

We express our solidarity with the just causes of the peoples in their struggle against foreign military aggression, occupation and interference in their internal affairs, and their devastating environmental and health impacts, and for a world of real peace and social and environmental justice.

We must all unite to actively oppose the existence of all US/NATO military bases on foreign soil and call for their immediate closure. We invite all forces of peace, social and environmental justice to join us in our renewed global effort to achieve this shared goal. 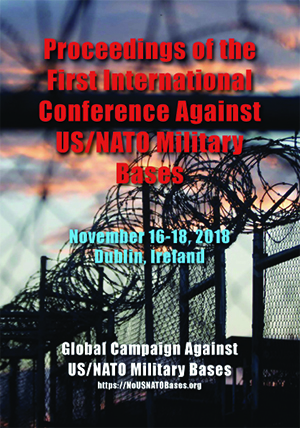